Developing Sox Head Coach Anthea Stringer has named two teams to travel to the U16 and U18 Queensland State Championships later this year.

The tours will help lead the DSX programme towards the WBSC U-15 Women’s Softball World Cup announced by the global body earlier last month.
The first edition of the World Cup will be played in Tokyo in October 2023 featuring 12 countries. The tournament will be played at the Komazawa Olympic Park Sports Complex, a legacy of the Tokyo 1964 Olympics.

Stringer say’s “We are excited to get the opportunity to tour with so many young talented girls as they work hard to take their game to the next level.”

“We had a hard job and wish we could take everyone, but we have no doubt those not selected will continue to grow and excel as we see a lot of potential in all of them.”

“The hard work starts now for all squad members.”

U15 Developing Sox Girls coaches Anthea Stringer and Chris Telfer have named a squad of 41 to further develop throughout 2022.

Head Coach Stringer says, “we are excited with the young talent coming through the grades and their eagerness to learn.”

“There is no question these girls have faced a tough environment in an important point in their development, but each and every one of them have shown their resilience by putting their hand up to be selected.”

“The focus of the DSX programme will be to create as many learning opportunities as possible both on and off the diamond for these young athletes to achieve their softball goals,” say’s Stringer.

Softball New Zealand is pleased to announce the reappointment of Anthea Stringer as the Developing Sox Girls Head Coach for another 2 years.

Stringer’s first involvement in the programme came about in 2017 as the Assistant Coach. 1 year later Stringer was elevated to the Head Coach position where she has since remined.

Stinger say’s “I'm excited and honoured to continue working with our female youth, providing a supportive platform for them to develop in all avenues of the game.”

During her time as lead coach of the DSX programme Stringer has worked hard not only to build better softballers but develop better people. Stringer has gone above and beyond and her initiative to provide U15 open clinics to four centres across the country this season is a true testament to her vision and objectives.

“We are looking forward to rolling out the new open clinic concept this year enabling us to provide a more inclusive development programme. Taking down barriers and creating a larger base for selection into national programmes is a key goal.

We need to ensure all our athletes have coaching opportunities so they can develop at their own rate and continue in the game,” Stringer said.

Developing Sox Head Coach Anthea Stringer has named 16 athletes for an internal tour from Wellington to Christchurch this October.

Stringer say’s “We had a hard time selecting this team after some great individual performances at the Auckland Easter Classic. These athletes showed they are eager to learn and represent the fern with the respect it deserves.”

“In line with Balance is Better principles it's important to allow our athletes time to play their winter sports and have a break from softball so the full squad will continue to be supported over the winter with some regional trainings and fitness programmes.”

“Through the internal tour our team will be exposed to new experiences and challenges that will help them develop both on and off the diamond,” Stringer said.

Head Coach Anthea Stringer is pleased to announce a squad of 39 young female athletes to participate in the 2021 NZ Girls Developing Sox programme.

"With the new format for 2020/21 age grade tournaments, we decided to cast our net wider to bring a larger number into the squad as an introduction to a high-performance programme", Stringer said.
"This will allow them to play, learn and compete against other likeminded athletes they haven't yet had the opportunity to meet.
We were excited to see the caliber coming through and can't wait to get started with them".

The 2021 programme will see all 39 athletes head into camp late March to tour from Wellington up the North Island, ending at the Easter Classic Tournament in Auckland.
"We wanted to take advantage of the amazing facilities and facilitators many of the smaller associations have as well as offering their members the opportunity to play against our young squad".
The squad will also look to give back and spread their love of the sport by running some fun interactive clinics along the way.

Stringer says, "It's about building a more resilient well-rounded athlete, giving life lessons as well as the softball specific aspects. We want our players to be in the game for a long time so they can take advantage of all the great opportunities Softball has to offer".

Developing Sox Girls coaches Anthea Stringer and Chris Telfer are pleased to announce a squad of 25 for the 2020 campaign.

The squad named at the conclusion of the Little League U15 Girls prize giving in Christchurch includes 11 players from the final between Canterbury and Wellington.

Head coach Stringer says “We are excited with the athleticism and raw talent these athletes bring. There is a focus on the future and we are excited to get started.

The squad will travel to Melbourne in April to compete as two teams at the Waverley Easter tournament. Following that a team will be named to compete in the International Friendship Series in Brisbane in July.

We are looking forward to running our camp around a tournament. It will allow our athletes to put their learnings into game situations.

The focus will be on development ahead of outcome, and we will be encouraging our athletes to push themselves outside of their comfort zones.”

Stringer was impressed with the girls work ethic and ability to adapt to new ideas over the course of the camp.
Stringer say’s “This is the foundation point for their future in wearing the fern, so installing great values and a high work ethic is a key focus for our programme”.

“We are excited to have the opportunity to take on the Australian U15 Squad while at the Friendship Series and believe these girls are up to the task and will do us proud” say’s Stringer.

The team will depart for Brisbane on 5 July to compete at the International Friendship Series from 8th-12th July.

Developing Sox Girls Head Coach Anthea Stringer has released a squad of 22 to prepare for the Friendship Series in Redlands, Queensland this July.

Selected players will assemble for camp in Christchurch this April with the final team to be named after the conclusion of the camp.

Stringer say’s “It’s an exciting environment to be part of, we get to see these athletes grow into people that embrace success for themselves and the people around them.”

“It was great to get the opportunity to watch all the athletes at a National tournament this year. It gave us a far better overview to select the squad we believe will represent our programme best”, says Stringer.

Follow the DSX Girls team as they compete at the U17 Queensland State Championships.

The Developing Sox coaches are pleased to announce the U15 Girls Team for 2018. The naming of the team comes after training camps conducted in Wellington and Auckland over the winter months.

A 15 strong team will travel to Caboolture, Queensland to compete in the U17 State Championships in September.

“Creating a good team culture, with a high work ethic by both players and coaches will be the basis of our campaign. This will be their first taste of wearing the fern which is an honour at any age. With two of our team values being “respect” and “commitment”, we have no doubt this team will hold high standards that will establish them in the game for many years to come,” she says.

Anthea Stringer has named 29 players in her first squad as Head Coach of the Developing Sox Girls programme.  The squad will go to camp in Auckland on the 17th and 18th of July. A team will be named to travel and compete in the U17 Queensland State Champs, 22-24 Sept in Caboolture, Queensland at the conclusion of the camp.

“We are excited about getting started with this squad. This group of athletes have stood out over the season for their provinces and have shown they are ready to be challenged”. Says Stringer.

Southland’s Chris Telfer has been named as the Assistant Coach to the DSX Girls Team. Telfer a member of the Junior Black Sox 2001 team will have no issues aligning with Stringers coaching style given their working relationship with the Southern Pride Women’s Team. The appointment is well deserved given Telfer’s contribution to the game, a contribution recognised by Softball NZ by winning the 2016/17 Volunteer of the Year award.

Anthea Stringer has been elevated from Assistant Coach to Head Coach of the DSX Girls coach. Like Ratu, Stringer has a lifelong involvement with softball and invaluable to our sport. Stringer the current Mainland Pride Women’s coach has been part of the Junior White Sox and White Sox campaigns as a trainer/medic and will bring considerable knowledge and skills to the programme. Like the DSX boys the girls will assemble for camp before heading to Australia in September to compete in the U15 Girls NSW State Championships.

Congratulations to the following players who have been selected into the 2017 Developing Sox U15 Girls Squad.

The squad will be involved in a 3 day camp from 7-9 April 2017 and then another camp over the term holidays in September/October 2017. This will lead into an Emerging Sox tour which will occur in 2018. 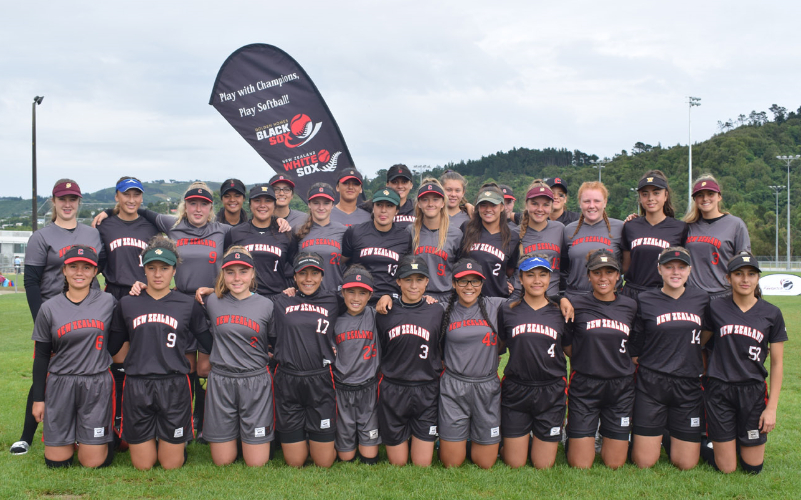 Softball New Zealand would also like to congratulate and announce Dave Elder as the Assistant Coach of the Developing Sox Girls team. The under 15 team will compete in the Waverly Eastern Carnival, 25-27 March, Australia.

Moffatt has 27 years’ experience in coaching men, women and juniors. He is dedicated to developing junior athletes and assisting them in realising their full potential.

"I help my young players to be better teammates, to set goals and achieve them, and to foster a love of the game through enjoyment and fellowship of their team", says Moffatt.

He will look to create a supportive culture that is based around respect, where players are able to set goals and work to achieve them.