The New Zealand softball community lost one of its greatest servants with the pre-Christmas passing of former national coach, life member and longtime national administrator RUSTY HAY.  Softball writer TONY SMITH pays tribute to a true pioneer of our game.

Rusty Hay devoted more than 50 years of his life to softball after watching the first Wellington teams to ever take the diamond in 1938.

Tributes have been flowing since his passing in Levin on December 16, 2016 at the age of 87.

Raymond Owen (Rusty) Hay, who later became a decorated Korean War soldier, was born in Wellington on February 21, 1929 and was a primary schoolboy when competitive softball started in the late 1930s.

In an interview with Softball Times magazine in the 1980s, Rusty revealed he lived beside the park where the City Mission team trained. The article noted: “The attraction of this new game drew the youngster over the fence  where he has been ever since''.


It is likely young, red-haired Rusty came under the influence of Alf Jenkins,  the New Zealand Softball Association president who carried out a lot of coaching at Wellington schools to spread the softball gospel.

Rusty eventually joined the Jenkins Gym club and remained with them throughout his playing career, graduating to the strong senior squad as an outfielder.

He was coaching from a young age, taking the YWCA Junior A team in 1947-48 while still in his late teens.

His softball career was interrupted by a tour of duty in Korea in the early 1950s with the Royal New Zealand Artillery, attached to the 27th British Infantry Brigade, which was involved in several major battles between 1951 and 1953.

Rusty was back in the Jenkins Gym team which won the Wellington Senior A championship in the 1953-54 season and also found time to coach the club's champion third grade side.

His crowning glory as a player was being part of Jenkins Gym side that won the John Lennon national inter-club title in Hastings in 1954-55 with the great Brian Wareham on the pitching mound. That was the last of three Lennon titles for Jenkins, who enjoyed a healthy rivalry in the Wellington competition with perennial rivals Miramar and Broadway.
Coaching continued to be a passion for Rusty who started his premier coaching career as Island Bay's player-coach from 1961 to 1968.

He became the Wellington Colts coach for the inaugural under-21 grade tournament at Christchurch in 1961, guiding a title winning team that included Walsh, Garry Ward, Peter Priddey and Bill Ashworth to a 1-0 grand final win over Whanganui, spearheaded by pitcher Charlie Phillips (who would later serve alongside Hay on the NZSA as chief umpire).

Rusty stepped up to become Wellington senior representative coach in the early 1960s as the province duelled with neighbours Hutt Valley for the mantle as New Zealand's premier softball province. Hay was at the helm when Wellington won the Beatty Cup in 1968.

Rusty Hay will go down in softball history as New Zealand's first national championship winning coach.
He became a national selector in the late 1960s and served as Alf Whelan's assistant coach for a home series that year against the another in 1970 against an Arizona All Stars squad.

Hay was assistant coach at the 1972 world championships in Manila, where New Zealand claimed a bronze medal.

In line with the NZSA's policy of promoting from within, Rusty took over after Manila as New Zealand head coach.

He was in charge for the 1976 men's world championships in Lower Hutt – the first “world series'' held in New Zealand.
After the tournament was rained out on the final day, the Kiwis shared first place with the United States and Canada, making Rusty our first world champion coach.

With a fine sense of timing, he bowed out at the top.

Hay confirmed in an Evening Post interview in February 1976 that he had “always intended  resigning after the world championships, no matter what happened''.

“Top place gave me a certain amount of pride, although obviously that pride is tinged with some doubt as to to what may have happened if the closing stages weren't rained out.

“I feel we could very well have come back and won the tournament, but then again, we might have finished in third place...
“We will be labelling ourselves as joint world championships on the team photo and the record book will show that we were equal placed first.''

Hay was twelve days away from his 47th birthday, but said: “It's time I made way for someone else. I've had a pretty good spin''.

He told the Post he had been with the New Zealand team for seven years, becoming assistant-coach in 1969 and had coached Wellington representative teams for 11 years.

Rusty stepped in to coach a New Zealand Rest team in 1977 and became manager of the New Zealand team in 1980, including the world championships in Tacoma, Washington State through to the 1983 mini World Series when the late Lester Baldwin took over.

Throughout his national coaching era, Rusty never stopped contributing to his adopted club, Island Bay as a coach and administrator.

Mike Walsh and Colin Ward remember how Hay helped develop the Bay into a national in the early 70s.

Fowler and Hartley – one of the most feared hitters in the 70s – won world championship gold medals in Rusty's New Zealand team in 1976.

In a touching tribute in an online condolence book, Fowler wrote he was “so sorry to hear of Rusty's passing''.

“He was a great mentor and a wonderful friend – my second Dad through my youth. Heaven has a great softball coach now.''

Rusty's experience and energy was also put to good use as an administrator. He served on the Island Bay, Wellington Softball Association and New Zealand Softball executives for many years and became a life member of Island Bay and the NZSA.


He later moved to the Johnsonville club, assisting wherever he could, including coaching.

Hay said in the Softball Times interview that the game had changed “beyond all recognition'' by the 1980s from its pioneering days in the late 1930s, particularly the advent of international competition.

“I can remember when we first played major league [club softball in Wellington] and having 25 matches was a big thing, but my Johnsonville team put up 69 matches last season.

Hay believed the increased number of games meant the game required “far greater resources'' and there were “far greater money problems'', which had “introduced a lot of strain to both the clubs and officials''.

Rusty once described his elevation to the NZSA executive in 1967 as “a natural progression'' after serving at club and provincial level.

Colin Ward said Rusty was a popular softball personality who could never do enough for the game.

“Every time there was a tournament, Rusty was there, lending a hand.''

“He was a good, honest lad who worked hard for softball. He was the man who looked after the unfiroms and got them ready for teams going overseas.''

Rusty served on the national executive for more than 20 years.

Rusty was equally dedicated to rugby. He played senior rugby as a hooker for the Onslow club (now Western Suburbs) and became a life member.

“His life was softball and rugby,'' Lyndsey Leask said.

Rusty had a varied working career, serving as a traffic cop in the early 1960s and later working for the Wellington City Council before retiring as assistant manager of Wellington Airport.

A former employee said, in an online tribute, that she would always be grateful to Rusty for giving her a job in the airport manager's office despite her hearing loss.

Rusty Hay died at the Levin War Veterans Home after a short illness.  A RSA tribute was delivered at his funeral.
He never married, but was survived by his sister, Wendy (a former Wellington softball representative), niece Lynne and nephew Greg and is remembered widely within the softball family for his selfless dedication to the sport. 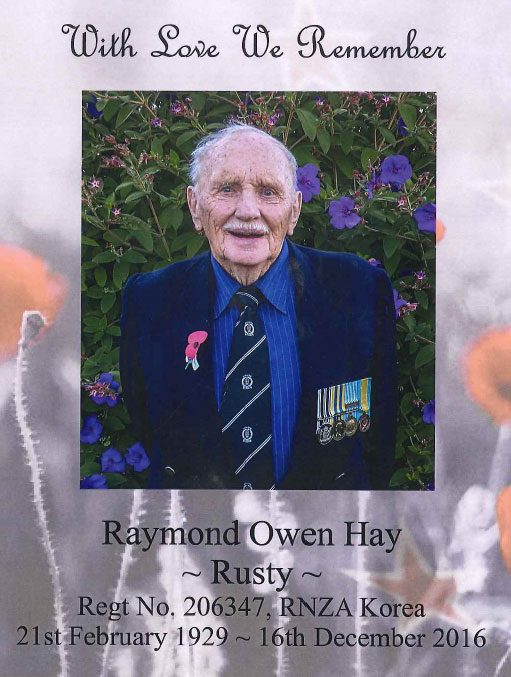